It's late and I'm tired. The last several years have made me real tired, though over the last year or so I've been trying to really allow myself to breathe, settle, and recover a bit from hurtling through a lot of battles during incredibly turbulent times.

Honestly? I'm tired of fighting. I'm tired of the United States being yanked around by rightwing extremism to the point of insurrection. I'm so goddamned tired of Republicans trying to tie women down into reproductive servitude, trying to criminalize any discussion of families that don't meet their Christofascist standards, trying to keep people of color entrenched in systems of oppression for the sake of white nationalism.

Trump stacked the federal judiciary with his incompetent nominees, and the Republican party just rolled over and licked his boots while he did it. Moscow Mitch helped steal the Supreme Court, which is about to strip over half of the country of bodily autonomy protections afforded by Roe v. Wade.

Democrats have been trying to pass life-changing legislation in this country, and everything is just hitting a brick wall of obstruction because the other major party lacks interest in governing and is completely in thrall to fascism. Frankly, if you're not actively using your votes to resist Republican power, you are holding the door for this oppression.

The midterms are coming up. Now is the time to pick a Democratic candidate, and knock on doors for them, donate, speak up and use your power at the ballot box. There is a very unfortunate likelihood that the Republicans could take the House and Senate, even as they continue to resist attempts to investigate their recent coup attempt.

Truth be told, I think we're all tired. And I think Abbott, DeSantis, McConnell and all of the other Republican top brass are completely counting on us being so desperate for normalcy that we disregard how dysfunctional things still are and give in to apathy.

Please don't. Donate a big chunk of cash to Emily's List. Find your favorite local candidate and get loud on their behalf. Show up to your school board meeting and stand in the way of book bans and pernicious ignorance.

Women need you right now. So do LGBTQ folks, black voters, native activists, the working poor, and the chronically ill. We need progress, and we all have to fight for it. 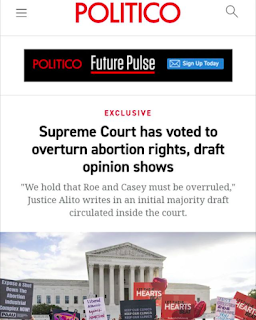 Posted by Kimberly Mackoy at 23:39