A Year So New, Bloodied & Blue

While we were gone in Hawaii, California suffered a cluster of mass shootings including an attack on Lunar New Year celebrations, and heartbroken outrage about Tyre Nichols’s murder was reaching a roiling boil. It was such a contrast, to be in the midst of such beauty with the news punctuating the days with updates of mindless catastrophe.

I suppose, to some extent, this is always the human reality: unbelievable awfulness transpiring at the same moment as incredible exquisiteness blossoms elsewhere. That doesn’t sit easy with me. The distribution is brutally uneven, the patterns of pain so repetitive, safety and serenity unjustly made into luxuries.

I am in the constant act of trying to manage my heartbreak around these forces. It would feel so good to know exactly what to do, how precisely to flip the table, what to say to meaningfully move things in the right direction so this bloodshed ceases. I listened and waited because I had no idea what to say.

The US has had more than one mass shooting per day since the start of 2023. The devastation of violence keeps raining down disproportionately on communities of color, and the last two weeks have highlighted yet again the awful, corrosive pressures that explode after centuries of racism, exclusion, exploitation, and fetishism of weaponry that sickens this society. Protests and anguish are well in order.

Tyre Nichols and Breonna Taylor shared a birthday: June 5, 1993. Tamika Palmer, Breonna’s mother, found this out yesterday, and re-lived the trauma of her daughter’s murder all over again.

It doesn’t have to be like this. It shouldn’t be like this. AAPI communities deserve to celebrate with joy. Black people deserve to live without fear that driving to photograph a sunset or even going to bed could end up being a deadly police encounter. All of us deserve to go to school, work, church, the grocery store, without the worry that the cancerous, weaponized and well-armed violence that America fosters will end us.

I can't find a credit for this photo, but it is from the protests following George Floyd's murder in 2020, and unfortunately it is freshly relevant today. 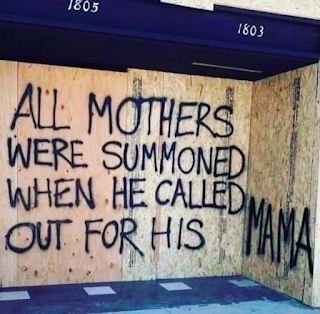 Posted by Kimberly Mackoy at 15:40 No comments:

Spilling the Tea on the Worst Party

Quick timeline recap on the context of the current Speaker of the House mess:

About fourteen years ago, the Tea Party emerged with a combination of conservative activism and "burn it down" anti-government attitude. The Republican party decided to handle this by absorbing this extremist faction and hunting moderates within their own party to extinction.

By 2016, a separate Tea Party faction was no longer necessary, as their anti-intellectualism, Christo-Fascism, ammosexuality and isolationism had become mainstream GOP positions. From this mess, Trumpism and the MAGA movement emerged.

For four years, our federal government was utterly headless, with important institutions and agencies hobbled or gutted, and which culminated in widespread protests and COVID mismanagement, not to mention babies in cages and a Supreme Court with an ill-gotten conservative majority willing to remake the United States as a theocracy.

And then, two years ago today, we witnessed a thankfully failed coup, complete with armed insurrectionists overrunning one branch of our government at the behest of another. The long line of peaceful exchange of power was ruptured, and people were killed defending and attacking Congress because a former president encouraged violence during the certification of our election results.

Today, that same "burn it down" faction is holding the House of Representatives hostage on what should be the easiest vote of the session. These extremists have never wanted to govern, they want to turn power to their own benefit while grinding the gears for absolutely everyone else who relies on a functioning government in the United States.

The slim majority Republicans hold in the House of Representatives is a fairly direct result of gerrymandering and Trump's meddling in the census. Without this tinkering, we might have a government that could pass meaningful legislation on healthcare, climate change, student debt, bodily autonomy...

Instead, we are witnessing this cancer continuing to cripple the basic functions of our federal government, which was the Tea Party pitch in the first place.

Please, at every opportunity, use your vote and your voice to block the Republican Party. None of this is normal, nor moving us toward anything better. It is pure politics of grievance and obstruction, fueled by racism and misogyny, along with phobias generally: homophobia, transphobia, xenophobia...

Eugene Goodman never should have had to face that mob alone, but I stay grateful for his bravery. We still have to hold the line against this insurrection. 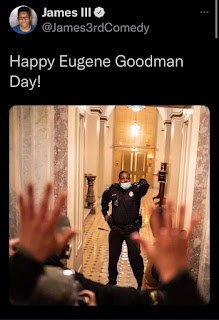 Posted by Kimberly Mackoy at 12:06 No comments: