Sharing some sweetness here. Almost every day, Dash and I do a garden happy hour. (Typically a dry affair, short of his splashing in hose water.)

At some point, I carry him up the hill on the flagstone path, and he demands a lavender flower. Dutifully, I pick out just the right one, with some foliage for good measure. He holds them in one chubby little hand while pointing ever higher on the trail.

When we came inside today, I set his flowers and foliage on his play table in his room. We got whisked away for dinner, and I forgot about them until James asked, "Where did he get the lavender?"

At bedtime, he had his flowers in his hand, and he held onto them as he was nursing. He knows I love to smell them, so he held them up for me to sniff as he nursed until his little arm was too tired. Even then, he held onto them, his hot tiny palm warming up that relaxing scent as sleep gradually took hold.

I was going to put him to bed with them, letting him keep the comfort of them in his grip and building the association with lavender and calm, but he eventually let them go into my lap. I will keep them for him, a sweet shared treasure from my loving baby, who already knows I love to smell flowers with him. 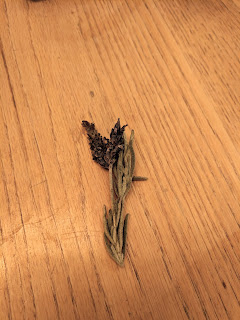 Posted by Kimberly Mackoy at 20:37 No comments:

So, just a reminder: This awful administration is going to damage all of us, even you have not yet internalized a sense of being squarely within their aim.

My baby was delivered by midwives. My husband has a foreign accent, and is an immigrant even if he is also a US citizen. It would be convenient to imagine his documents would be respected, if we were afforded due process, but we are actually seeing US citizens with legitimate birth certificates deported right now because federal agents independently decided they were insufficiently American.

The erosion of due process has already begun. That applies to all of us.

I already know they are coming for me. I know it as a woman, as a protester, and as a traveler. This is a misogynistic, xenophobic, insecure government, and I tick all of the boxes to trigger them. They will come for my bodily autonomy, but they will try to restrict my rights in other ways first, I have no doubt.

I have also been worried about my family, knowing that my husband would present as foreign first, and there might not be an opportunity to protect him with papers. One of my contractors told me that one of his employees, Irish by birth but a US citizen, was rounded up at a job site here in San Francisco and taken to an unspecified detention center because he forgot his ID at home one day. He also has a family and children.

I must admit, however, that the stories of border region midwife deliveries being called into question open up a new avenue for concern. It hadn't occurred to me that my child's citizenship might be on the block. Here it is, though.

And it makes me so angry. I chose to give birth in the wonderful care of our midwives because they are excellent, attentive, and diligent, offering practical and supportive care to pregnant women and newborns. That the professionalism of these women would also be called into question, while simultaneously throwing children into bureaucratic chaos, is yet another reminder of the pernicious attitudes of this administration and its supporters.

This woman's story could easily become my own. This is how the slide into statelessness begins, and threatening citizens in such a manner is chilling, racist harassment: https://nyti.ms/2PvdXnN
Posted by Kimberly Mackoy at 11:20 No comments: