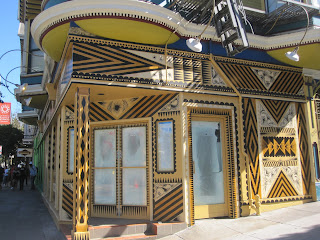 This time last week, something pretty cool happened. The call went out on Shrine's Facebook page, saying he needed some help to paint a store mere blocks from my house. Shrine's work is beautiful, and he created one of my favorite pieces of art at last year's Burning Man. The art car was like a dream, so intricate and gorgeous--it's actually been on this blog before, in a previous post about Burning Man. Here it is: 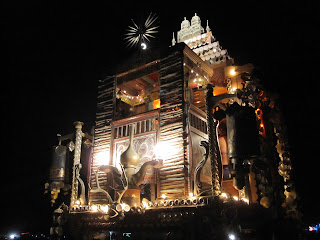 So I was tremendously excited to go help him make some art happen in my neighborhood. I got the details, and headed his way the next afternoon. Much to my delight, I spotted the project right away: a landmark Victorian, right on the corner of Haight and Masonic. There were lines stencilled all over the outside of the portion that had previously housed a payday check place, and I was given instructions and a pot of paint. I very happily went to work.

While I was intently avoiding blunders in black paint, I started hearing a familiar name. People were looking for Nera. Hmm. I know a lot of people, but I can say with a great degree of certainty that I've only met one Nera. She was a clothing designer I met in Paris, while teaching and performing in the inaugural BellyFusions Festival, years ago. Shortly after our meeting in Paris, we caught up for drinks in London. After that, I spent some crazy years travelling for workshops, moving repeatedly, and was generally pretty bad at keeping in touch.

Imagine my surprise when it turns out that the Nera I had met all that time ago had moved back to San Francisco, not far from the time I also returned, and it was actually her store that I was painting.

There's a lot that I love about this beautiful little city, but serendipity like this seems to be woven into its social fabric. My quest to chase down the magic of a Burning Man art car resulted in a very surprising reunion, and also satisfied my dream of reinvigorating one of our iconic Victorian ladies alongside an artist I admire. As a gentleman said, admiring our work in the rain: "She sure does deserve the love, doesn't she?"

To see more of Shrine's work, go here: http://www.shrineon.com/
Posted by Kimberly Mackoy at 17:30 No comments: