May Your Days Be Merry; Of Love and LEGO

Currently, Dash is going through a phase of playing primarily with cardboard, construction paper, and painter's tape. His focus is on crafting, finding treasures on the ground as he walks through the world, and upcycling the ordinary into the extraordinary with his imagination power.

If anyone asked him what toys he loves, he'd absolutely say LEGO, but he's mostly spending his time building things out of odds and ends from around the house. He frequently revisits his old toys, and plays limitless games with them, even as he looks at toy catalogs and imagines the infinite fun of MORE.

MORE is fun to imagine, and can be fun to give, but is not the source of long-term joy.

He's excited about the advent calendar (something that links me to my own Grandma Christmas), and about getting out decorations, and certainly anticipating opening presents once he sees them wrapped up under the tree, but even now a lot of what he talks about in the season ahead is the doing, and not so much the getting.

Kids are sucked into this capitalist whirlwind as much as any of us, and they get snared by loud advertisements and the promise of novelty with even less framework of skepticism than us adults. We're human, and novelty is appealing.

However, the lasting pleasures that resonate reveal themselves in excited talk about the rituals and expressions of love, even from very little kids. Momentary infatuation with material things fades very fast against the brighter light of connection, the spiritual power of stories, and the collective act of tending the fire together through the cold and dark. 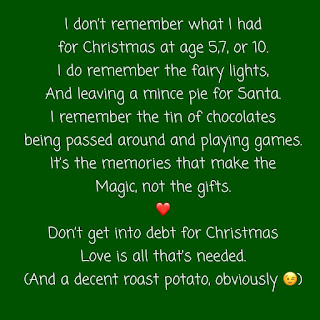 Posted by Kimberly Mackoy at 12:58 No comments: