Thinking of my Grandmother

Remembering a school project about asking a family member what it was like when they were younger: What did milk cost? What has changed? Interviewing Grandma at her glass kitchen table, her telling me answers that I recorded on some long-forgotten paper that has now become precious, lost in an inconsequential stream of homework.

I wish I could hear her voice again, her gentle cadence recalling girlhood. I wish I had her answers memorized.

Seeing my baby son meet his other great-grandma, and wishing my Grandma had that quality time with him, too.

The postcards I bought for her everywhere I traveled but never managed to send. I saved them up to put in an album full of stories she can no longer read.

The autobiographical book of her remembrances on my list for Christmas, unbought and now unnecessary.

A Thanksgiving phone call I didn't make this year. Christmas glistening on the horizon, full of a million reminders of her absence.

Her presence in my heart, her ring on my finger as we drive through autumn near her part of the country. I can't even come close to forgetting.
Posted by Kimberly Mackoy at 21:12 1 comment:

While breastfeeding my son:

Looking down at you, my lovely little elf baby. I am so grateful for now.

I’m so glad we found each other across space and time.

Remembering a few days before, reaching out into the ether for my grandmother, and she has been scattered back out into the universe.

And to my mother: I finally understand, “You will always be my baby.” I wish you had made other choices, that we could be nearer each other in so many ways, and I love you.

The anniversary of embarking upon a relationship with the father of my child.

Like spring come again, my summer baby in autumn, my Thanksgiving. Winter lies ahead. I am grateful, and delighted for the sparkle in those dark days to come.
Posted by Kimberly Mackoy at 21:36 No comments:

I'm over here building an ecosystem out of native plants and a home to withstand as much as possible, to provide what shelter I can, and fighting back against this shortsighted kleptocracy. I want to deliver a verdant world that outlives me.

Sometimes, it all feels really feeble. But, I've made a commitment to a tiny baby, so I carry on trying to build a better world for him, his cohort, and beyond.

There will be more than enough suffering even without that of our own creation. I can't even read about Scott Pruitt's gutting of the EPA without raging, thinking that Trump's base voted the way they did because they wouldn't live long enough to see the awful results. The ultimate, ignorant selfishness.

I've lived through major floods. I've been reminded of how small we are against storms. Shredded environmental protections deepen our misery when we are already so vulnerable to the power of this planet, and every cut we inflict upon the natural world rains pain down upon us.

We can choose something else.

I'm going to keep planting these trees, keep building the bees a place to hide and the hummingbirds a patch to protect. This little Eden will stand in contrast to the fiery Hell awaiting those who turn their back on stewardship of this Earth.
Posted by Kimberly Mackoy at 23:35 6 comments: 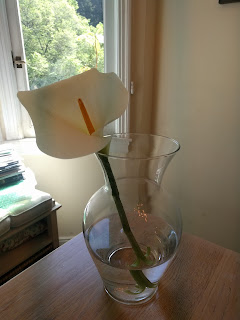 Before I went to bed, I put the flower in water. I decided to trust that it was a peace offering, and that sometimes it's scary and awkward to ask for help.
Posted by Kimberly Mackoy at 17:18 1 comment: