When I was pregnant with Dash, I embarked upon an insane adventure to redo our sandy hillside backyard. To call it a slope is to understate the matter by quite a lot; really, I've built us a short, sweet mountain hike, straight up into the sky.

The old retaining wall was failing, and the ornamental terraces had long since fallen over, so I started from scratch. I put in geotextile to stabilize it, and have since been replanting the bare sand with (mostly) California natives, including a lot of edibles that the birds and critters are likelier to feast upon than any of the resident humans are.

Three years in, I've learned a lot in my efforts to rewild this urban turf. Giving this patch of land back to the life that was here before my ancestors arrived on the continent has not been easy. Invasive species creep in from all sides, erosion carries topsoil away, and there's still so much I don't know about the intricacies of plant communities in our microclimates...

But, the more I'm out there, the better I feel, and every day my ability to read the ecosystem deepens. And, particularly in this pandemic, putting my back into turning this land over to nature feels deeply good, like a sacrifice and a blessing both given and received.

This Earth Day, and every day, I wish you the joy of green, growing things and the living treasures they attract. There is hope in this exchange, and a wonderful, visceral connection to calm the monkey mind.

Gather your seeds, read the terrain, and let yourself be small in our big, beautiful world.


Posted by Kimberly Mackoy at 21:42 No comments:

A New World is Coming

I keep seeing jokes and talk about the COVID baby boom, and I get it, but it's so glaringly the observation of childless people discussing the experience of other childless people, the luxurious boredom of boinking like bunnies through this ceaseless isolation, seeking pleasure and connection to ease uncertainty.

Is it enough to counter the the opposite push, though? What about all of the women who might have had another, but have instead been forced to give up everything to tend to the child/ren they already had?

How about that sexism that has so many families choosing his job over hers? Or those households where her vastly increased emotional and physical labor to keep the ship sailing right are rendered invisible, even if she is also trying to work remotely as she becomes a substitute teacher?

What about this reality check that, at any moment, you could become solely responsible for your child, or children, and that help is really not coming? Or the creeping feeling--which many parents keep at bay in the best of times--that we are not enough for this task and that the math simply doesn't work, might actually be the reality?

I can tell you, I've got a husband who is working every day, not just at his job, but also to take on an impressive share of household and childcare duties. We are by far at the good end of how these things shake out, and I'm still feeling utterly spent most days. Hell, I started off feeling burnt out, trying to claw my way out of unpaid domestic servitude toward something that actually felt fulfilling, like a true calling. Yet, here I am again, in perpetuity.

Honestly, it's got me feeling like the only elective medical procedures I'd leave the house for would be a tubal ligation or an abortion.

I love my kid so much, and the idea of having another has begun to terrify me. He is amazing and magical, and most days he feels like way more than enough.

We work to correct the balance, but still a lifetime of sexism has brought us to a place of imbalanced incomes and opportunities. Our most active efforts are noble, and are still executed in a world of systemic bias and unequal outcomes.

My husband and I grew up in different classes, and in many ways we live in different classes still. I remember, when I was studying international development a long time ago, a discussion about this very idea: that partners in the same household could be in different socioeconomic spheres, and how this affected the impact of aid.

That insight was striking, but it took me over a decade to realize it was my reality, too, albeit in a softer way. My climb has been a steep one, and I'm never more than a few moves away from tumbling. And nothing has highlighted the precariousness of my position more than becoming a mother.

I wish for us to remake society to restore the communal joy of childrearing. Children were never meant to be raised in isolation, by one or one-and-a-half or even two overstretched adults. They require peers, intergenerational connection, a community to support them in exploration of the joys of existence.

I hope, when this is all said and done, that the women of this country go on strike. I hope we follow the lead of our Icelandic sisters and demand parity, that we take over the government and rebuild something equitable and efficient over the ruins of patriarchy. We must demand ratification of the Equal Rights Amendment, and we must grant women absolute power over their reproductive capabilities.

We have to survive the shredded remains of this iteration, but I hope our anger can empower us to build an improved incarnation in the aftermath. A new world is coming, one way or another.
Posted by Kimberly Mackoy at 11:03 No comments:

I'm trying to have a productive response to this pandemic chaos, and for the most part I am succeeding. My initial impulse in tough times is to make things, grow things, learn things.

But, I tell you what, if I had all of my time to myself right now, I'd be writing up a storm.

I stay mad about the federal response to this. I read more than I'm able to respond to about the countless ways Donald Trump and his squad of sycophants have exacerbated this crisis and gotten more people killed, and continue to do so every day with lies and bidding wars for vital medical equipment.

I could write all day long about the daily revelations of stupidity and corruption, how this administration is utilizing this crisis to punish political enemies, torch alliances, and line their own pockets in the process. How they would cancel democracy in this moment and saddle us forever with their crony idiocracy, pulling page after page from authoritarian playbooks.

There are tomes in this tragedy about the impacts of sexism and poverty, and the actions we must take next to build a better world out of this rubble.

And, actually, as Dash grows more accustomed to this strange new normal, he clings to me less when I sit down to write, so I may yet figure out some way to action on this regularly and effectively.

Meanwhile, though, I spend my hours trying to keep up with it all. Keep the child fed and healthy, keep the dog moving, keep planting seeds so that fresh fruit and veg stay in the picture as we brace for the apocalypse, make masks...

Stay engaged. Stay mad. Take whatever actions you can to stay strong and fight back.
Posted by Kimberly Mackoy at 10:23 No comments:

This, but make it early motherhood...

I have to admit, at times during this lockdown it is totally lost on me that everyone else is going through feeling trapped and isolated, because this shit is actually familiar as hell to me over the last few years.

Be warned: This is a post about my struggles as a parent. Anyone who tries to turn it into a gratitude exercise or tone policing will be gleefully eviscerated. I'm in the mood!

This morning I woke up, did my inhaler puffs (because that's part of my life now, but more on that another time), and rallied my spirits as much as possible to have another day of indoor circus time with a toddler.

It didn't work. Or, it did briefly. (The rallying. Jury's still out on the inhaler.)

Pretty shortly after I got up, I realized I needed to have a solid cry in the shower. I needed to actually feel my feelings, not try to keep my voice steady in front of a child while I was tumbling into the abyss within me.

I put on Sesame Street for Dash, and the tears started before the water was even warm.

While I count myself fortunate to have had the flexibility to stay at home with my child, both before and during this pandemic, I have also been attempting to conjure a life for myself that doesn't feel like unpaid domestic servitude.

I have spent so many days in relative isolation with my kiddo that you'd think that I'd be good at it by now. But, alas, days like this appear to still be part of the program. And they are brutal. With word coming through last night that we have another month of this, the physical sensation of my feelings could no longer be held at bay.

In a 30" square shower stall, I tried to resolve my feelings of desperation and claustrophobia, as I also attempted the steam out the persistent wheeze in my left lung.

Over and over in the last couple of years, I have tried to clamber my way up into a balanced life, succeeding in moments only to find myself sliding abruptly all the way back down the greasy pole to the bottom with a thud.

So, here we are again. But, this time, with yet more restrictions on movements, friends legally at a distance, and the deep reality of really having to muck through this without outside help.

As lonely as this feels, I 100% know that I am not alone. I imagine the majority of mothers have felt this, and are probably deep in it right now in much the same way. Fathers, too. Heck, all caregivers. We are all now in this WFH trap where our shift never really ends and tasks seldom get the luxury of our full bandwidth.

I am fortunate to have a partner who is an excellent husband and father, and who thankfully finds parenthood a welcome change of pace from his newly-altered, intense work days. He sees this all for what it is, thank god, so I am at least relieved of judgment from that side.

But, even in this isolation, I feel the guilt and fear. The feeling I usually have, that I'm earning my A+ in motherhood, slips aside to make room for persistent anxiety that my child will sense my disconnect, be damaged somehow by my lack of creativity and precariously perforated positive attitude.

There's more of this to come. There will be ups and downs. Life will have meaning again beyond getting through the days and serving others first.

And so the mantra repeats, until breathing eases again and falling feels like flying. 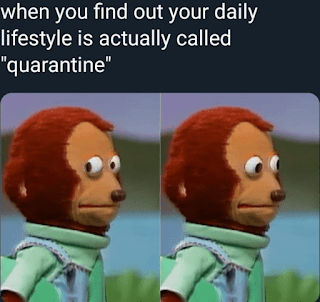 Posted by Kimberly Mackoy at 13:35 No comments: