The Way of Pain

I'm going to attempt to say something sensible about Palestine and Israel here, and the odds are high that I'll mess it up. But here goes...

I visited Israel in 2016, to attend the wedding of two dear friends. James and I were their guests, witnesses, and photographers when they married at San Francisco's City Hall, and we were honored to be invited to Tel Aviv to celebrate with their friends and families. These same friends have also openly struggled with Israel's gnarly history, which indeed mandatory military service conscripted them into. They are the first to decry how fucked up all of this is. (Their unease is shared with nearly every Israeli of my generation that I've met.)

Upon arrival in Israel, the first place James and I stayed was in Sheikh Jarrah, which is the area of Jerusalem where the recent looming threat of eviction during Ramadan of Palestinian families to make way for Jewish settlers was one of the flash points for the current violence. On our way in to the ancient city from the airport, rocket fire streaked through the night sky.

When we were planning our trip, I wanted to stay in East Jerusalem. We were welcomed at the American Colony Hotel, which was beautiful, and which in name and history still frames part of my understanding of Israel's complexities: An Ottoman pasha's home, sold on to some Messianic Christians from Chicago in the 19th century, situated in the first Muslim-majority neighborhood outside of the walls of Jerusalem's Old City, and run as an oasis of neutrality for diplomats and dignitaries in a city divided.

As the march to war has been building over the past month, the place names are familiar to me, and my acquaintance with the city puts a visceral sense of place to the flashpoints. James and I walked through this quiet neighborhood to Damascus Gate, where barricades were recently put up to prevent Muslims from gathering after prayers at al-Aqsa mosque. When Israeli officers fired rubber bullets at worshippers there, and videos played of fires and bloodshed at the mosque, it stands in horrifying contrast to the day I stood there in the sunshine, watching mischievous children get scolded by their elders while parents prayed inside.

I have never been anywhere that felt as simultaneously beautiful and apocalyptic as Jerusalem. Its Old City quarters house Muslims, Jews, Christians and Armenians in relative peace, a longstanding cohabitation indeed. I walked through the Church of the Holy Sepulchre and saw over a millennium of Christian devotion rendered in Byzantine mosaic and ancient graffiti, embodied by a diversity of sectarians I don't think I will ever see again anywhere else.

But history is omnipresent, deep and bloody. I walked the path of Christ's torment en route to crucifixion, and then on to the Western Wall, crossing the skybridge over Jewish worshippers crying at the foundation of a Temple destroyed to a Muslim holy site built on its remains. Upon leaving the Temple Mount, we walked through Palestinian children firing imaginary guns at the deadly real armed Israeli soldiers, who frankly weren't much more than children themselves. I had little faith that the uneasy, imbalanced ceasefire would hold.

Let me be clear: I think that Jews deserve to feel safe, and I think the world has generally proven itself wholly untrustworthy with that. I also think that Israel has reproduced the displacement and discrimination that inspired its foundation in the first place. As an American, I see an awful familiarity between the inception of the United States and Israel's origin story; indeed, the US has explicitly helped develop the narrative of Israeli exceptionalism in a way that mirrors its own arrogance and desire to mask genocide and imperialism. I have huge problems with how both the United States and Israel came to be and continue to be, and I continue to be appalled at how the US remains complicit in the misery, displacement and oppression of Palestinians by Israel.

I also spent days refreshing my understanding of Israeli politics so I could try and briefly convey the complexity of the challenge there, and the task is genuinely beyond me. Suffice it to say, Netanyahu has been a contentious force for a decades, and during that time he has used settlers as a way to further invade Palestinian territories while also using the ensuing conflict to shore up his shaky coalitions with rightwing factions. His machinations clearly endanger Israelis, and plenty of them know it, but the incredible plurality of parties and competing agendas make it hard to actually oust him, even though he's failed to secure majorities and has been a focus of corruption investigations nearly from the start. (Americans that idolize the notion of coalition governments should do some deep reading on Israel to get a feel for how fatally stuck they can leave a country.)

As one of my Israeli friends put it at our celebration of Biden's victory, imagine what the US would be like if Trump had been in power for twenty years instead of a single (unpresidential) term. The Netanyahu years have led away from the peace process and toward war, and there will be no improvement to the situation so long as he remains in power.

So, here we are watching more death and destruction in the Holy Land. (Some sick factions of American Christianity even cheerlead this, as it's part and parcel of their End Times fetishes.) The people of Gaza are kettled on a tiny strip of land, trapped, deprived of free movement, subject to airstrikes, houses reduced to rubble amid a pandemic, bodies of children stacking up. Families in Tel Aviv are also racing for shelter, as the Iron Dome's impressive but not impervious defenses fend off rocket fire, debris raining into the Mediterranean Sea.

As we left Jerusalem to head to Tel Aviv, James and I literally drove through a fire. It started small, close to the side of the road. We had been talking to our Palestinian taxi driver about Ramallah, which we had seen from the road, and I remarked that there was a grass fire. We ended up stopped on the highway next to a large tree, because drivers in front of us had paused to gawk and take photos of the blaze. I knew that if we didn't move, the flames would be on that tree and in danger of setting our car on fire, but we couldn't go anywhere until the stopped vehicles cleared. Indeed, the fire lit up the tree next to us incredibly quickly, which scared folks in front of us badly enough to get moving. The fire was so close by the time we could move that we could feel the heat through the windows.

That sense of seeing just where the fire is heading, with nobody moving, feels like an apt metaphor for the last month of keeping up with this news. I'll never forget what it felt like to stand in the heat gazing up at the Dome of the Rock, nor the heat of that fire about to overtake our taxi.

If anyone needs me, I'll just be over here pressuring my elected officials to stop propping up warfare and hoping Netanyahu's corruption trials lead to a forced retirement sooner rather than later. More layers of trauma, bloodshed and death bring us no closer to peace. 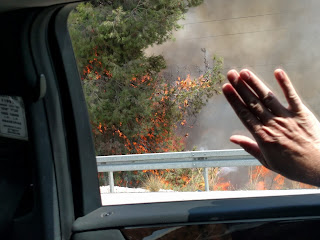 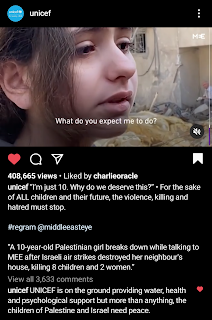 Posted by Kimberly Mackoy at 00:04