We made it. Now, I want to take a moment to talk about the wonder of President Joe Biden, and what it means to have him in office now.

First, I will state plainly that he was not my first choice. I actively boycott boys at the ballot box. I'm all the way here for the abolition of the white heteronormative patriarchy. At first glance, Biden's election does not achieve that.

However, we have just endured a miscarriage of constitutional duty under that orange oaf, who exited the capitol ignominiously this morning after breaking our long tradition of peaceful transfer of power. Over 400,000 of us are dead because of catastrophic mismanagement of a pandemic, the spread of a plague with no functioning federal government to mitigate the harm. White supremacists were offered pride of place in the last administration, even as cries for racial justice rose from we the people.

We now have a president who has experienced deep loss and grief, and regularly embodies empathy when presented with someone else's pain and struggle. He has stumbled, and he has learned. Biden has moved voices to the fore that we all desperately need to have there; Black women have long spoken truth to power, and we have long needed a federal government that looks like America itself. Biden has prioritized that, and is willing to move out of the way for representation that matters so much.

Can you appreciate his bravery? In the wake of racist insurrection, he has ensured that Kamala Harris stands ready to lead if any ill should befall him. It's an amazing chess move, flagrantly defying those last-gaspers of white male privilege, and it's beyond symbolic because Harris is there to give this administration teeth, too. Though his whiteness and maleness may placate the less imaginative among us, he has assembled a team that erodes the blandness of such power.

Biden is an institutionalist, ascending to office to assess and improve our vandalized democratic pillars. He has a long memory of how our democracy can function, as well as a detailed view of the imperfections in it.

And, let's be clear: He is not perfect. His administration will not be. There is no perfection to be found anywhere in human endeavor, only the endless labor toward a more perfect union, toward greater justice, and toward expanded opportunity for us all. That work is never done, and will not be done in four years' time, nor eight, nor any number to follow.

But Biden believes in that work. He has dedicated his life to it. He has been bruised and battered by life itself, and he has resolved to elevate others. That is so profoundly antithetical to the perniciousness of the last four years that it is indeed difficult to set aside cynicism and retain a kind of clear-eyed hope about healing, but that is what we are called to do.

I am so grateful that my son will have an entirely different version of masculinity before his eyes as he ages into being able to see what's really going on, following four years of raising him amid the fight against fascism. I am so deeply relieved that my child will see that power should be inclusive and riveted with empathy. When Obama bestowed upon Biden his final Presidential Medal of Freedom, I cried, too, for the man who fought rapists and sought to free our families of cancer in the wake of his own grief. That ceremony stood in stark contrast against the looming specter of toxic masculinity that Trump embodied, and I prefer that my son remember Biden's version of old man in charge before we move on to a more colorful, female future.

Today, I watched women in positions of prominence usher in a new era. I felt a stability return that has been noticeably lacking; how much energy have we all expended in that long uncertainty? I do not long for some pre-2016 status quo, but I am happy to feel a glimmer of hope again. I am overjoyed to have a president who is comfortable in the presence of--indeed, confident because of--the presence of brilliant women with backbones of steel.

Today, we return to the Paris Accord. We rejoin the world in so many ways that matter, and we come humbled to the table to engage in the most important work of humanity, to stem the rising tides of climate change and address the woes of environmental injustice. We can start dealing with the life-or-death matters of our shared future with our allies once more.

Today, we have a president that can speak whole and complete sentences that tell the plain truth of the pain of our nation's founding. Those words alone are not a solution, but we must have them to begin. We have a mandate to manifest an entirely different destiny that is honest about our history of genocide and theft, and seeks to rectify the wrongs of our ancestors inasmuch as we can from our positions of privilege within the troubled now.

Today, we begin again, carrying the baggage of the past but less than we endured yesterday. And we have someone who has put his hand up time and again to be of service in that endeavor.

Biden offers himself as a bridge over tumultuous waters, and I am grateful that today feels significantly less adrift than so many days that have come before. We have to build back better, not back to normal but forward to finer. 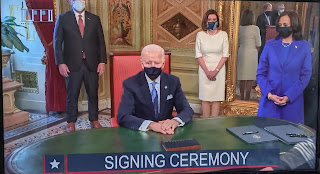 Posted by Kimberly Mackoy at 12:14