Finally, it is Election Day. I awoke to many loving posts from LGBTQ+ families asking that we remember what's at stake for them at the ballot box, posts from Black families recounting generations of struggle against voter suppression, posts from new citizens citing their pride to help build the America of their dreams.

“If you are neutral in situations of injustice, you have chosen the side of the oppressor. If an elephant has its foot on the tail of a mouse, and you say that you are neutral, the mouse will not appreciate your neutrality.” Desmond Tutu's words are at the forefront of my mind right now; they call us to use our best judgment to relieve the impossible weight of suffering for people in our communities, vulnerable by virtue of sex or skin color, age or orientation, paperwork or presentation.

Today, US citizens have an opportunity to exercise our most potent weapon to fight injustice. Over 230,000 of us have died of COVID in a phenomenal failure of national leadership. White nationalist violence is surging, encouraged by the occupant of our highest office. Our economy is in disastrous shape, and an impeached president is on the ballot alongside his enablers in Senate, who could have done something about this mismanagement and repeatedly refused.

The choices presented to us today are not neutral. They are not equivalent.

I will not stand in neutrality as oppression comes for me and surges all around me. I urge you to fight alongside me. If you don't have so much hanging in the balance, acknowledge your privilege and vote to improve the circumstances of those more vulnerable than you.

This choice is binary: Vote to cast off a fatally damaging would-be dictator, who is shortening our lives and eroding our hard-won progress, or hold the door for the collapse of American democracy. The stakes are incredibly high.

Vote for Biden. Fire Trump. Cast your vote for the opportunity to build something better together, because we all deserve the chance to live lives that are less brutish, nasty and short.

Today, we have a sacred duty to protect democracy in this country and learn from the cracks that have been revealed in our foundation. Please don't feign neutrality in the face of someone else's peril. 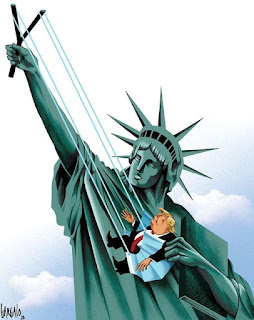 Posted by Kimberly Mackoy at 16:04